I'm here to talk about an alternative treatment for cancer. One that has taken over the news in Brazil for the past couple months and represents a real chance of cure for many.

But first i'll let you guys know who I am. My name is Lucas Eustaquio Gomes da Silva and I've been diagnosed with a rare and aggressive type of cancer called DSRCT (https://en.wikipedia.org/wiki/Desmoplastic_small-round-cell_tumor).

For the guys that don't about this beast I can only say its very bad news with less than 5% cure rate. I've been diagnosed in January 2014 and since then I've been submitted to 4 surgeries and more than 15 very debilitating chemotherapy cycles (2 different regimens). I did that kind of treatment until august 2015 when I choose to have life quality over life span. So far i do not regret this decision. From the current medicine point of view i'm a terminal cancer patient.

Now lets get back on track. In the past couple months one of the most trending topics has been about a substance called phospoethanolamine also known as 2-amino-ethanol phosphate (A.E.P). It supposedly have a strong anticancer activity  and is more powerful than most chemotherapeutic drugs with little to no side effect. It also is supposedly effective for many different types of cancer. Many untreatable ones like melanoma and kidney. Note for many: this substance is available to purchase in the form of supplements under the name of "Calcium AEP".  Its needs to be ingested with a spoon of olive oil as it is liposoluble and therefore it needs to taken along with some good fat.

This is too good to be true, right? I've seen plenty of hoax over the internet claiming the cure of cancer and none of it were true. At first I simply dismissed this news, but as it kept coming back I started to pay attention. It all became publicly know here in Brazil when a guy named Carlos Kennedy was arrested for distributing these pills for free. It isn't ANVISA (Brazil's FDA) approved, and here unapproved medication cannot be sold or distributed. This was very strange because people that were taking those pills started to show all over with very impressive testimonials. Some were almost raised from the dead (like Kennedy's mother) and many showed scan results with disease regression.

It still isn't a very strong indicator, but one patient like myself must be open to some unorthodox procedures, right? I may have chosen a rough path, but by all means, I want to live! So I started studying. And I was impressed with the reported results. The substance have been submitted to many tests in vitro, in vivo and even human tests (that were abandoned god knows why - profit?). I won't be able to put much references here because most of the material is in Brazilian Portuguese. But I do not want my word take for granted, because I said most material, not all, right?

When some stuff is actually true it shows up in various, unrelated places. It turns out that the Brazilians weren't really the pioneers of this discovery. One should pay close attention to the german Dr Nieper. After all he treated Ronald Reagan cancer back in 1985:

Man, the scientific principle is very solid! It doesn't really kills the cancer cells, it just reactivates the mitochondria on anaerobic cells and the cells themselves becomes more prone do die by apoptosis or to be eaten by our macrophage buddies. Of course this explanation is overly simplistic, but the curious ones can search about "Kennedy pathway". And mechanism leaves us some catch. It needs a properly funcioning immune system. So chemotherapy and radiotherapy patients won't bennefit that much. Fortunatelly thats not my case anymore... And guess which disease is characterized by anaerobic cells roaming free? Yes, thats it: the flu! Sorry, it was so obvious that I couldn't resist. Its cancer (seriously). The flu is actually caused by the position of the stars (not serously...). 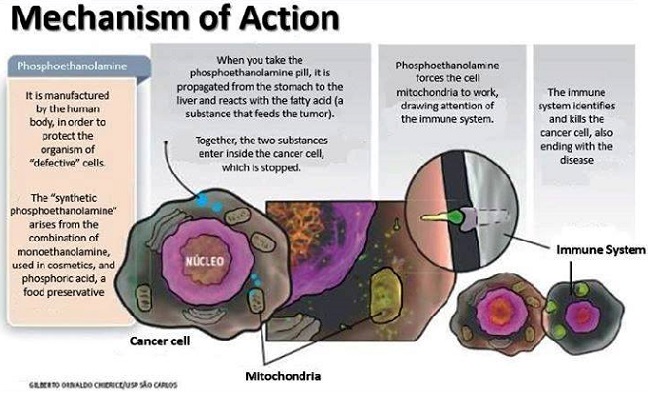 I confess that I was very impressed at that point and even started to raise my hopes a little bit (who wouldn't?). It was enough for me to try it as I have little to lose. This substance is endogenous, so it is produced on our own body, making it little likely to have sizable toxic effects. And even if it a bit toxic I would choose this over chemotherapy a gazillion times...

As it happens, the researchers in Brazil were willing to distributed those pills for free to anybody that asked. But as said before they were forbidden by ANVISA (Brazil's FDA). The only path left was a lawsuit. A benevolent judge was granting those kinds of injunctions and after some battle I got my hands on pills enough to last a month. Unfortunately superior instances of court justice weren't that benevolent and I won't be able to get more using this method, but it was enough for me to test it!

And so I started taking those pills. It felt like taking any vitamin and didn't affect me at all in my lifestyle. No chemo sickness, fatigue and such. After 20 days i did the MRI. Luckily I had done another one just two months prior. So the scenario was 1 month of tumors running wild and free and 20 days of their having phospho being pushed deep down their little malicious throats.

I wasn't expecting much. My tumors are very aggressive and they can noticeable grow in the span of one month. I have those pesky bastards all along my belly, but right now they are too shy to show up. But they are running a congress in my liver (to decide the most mischievous way of taking over my body!), and last time I knew they were triplicating their building size. At least they were efficient and done so in 3 months. And those ones show in the MRI!

And .... tada!! No, not yet... Surprise! Double surprise! And... This is becoming boring, right? But i know you will continue reading... So here is your prize: The tumors were very afraid and taken by panic! They were so lively last time (took all that contrast) and this time they shied up a little. Taking only enough contrast to show their contours. Word said is that 10% of them committed suicide, afraid of losing their almighty power as there were a 10% reduction in size.

Its has been a long time they were that afraid. Didn't happen this year at least. I was expecting the result to be inconclusive, as it was only 20 days and the tumors are very aggressive by now. It could have grew and shrunk in this period. But those results? Unquestionable. Stability or little reduction not only in size but in activity is a huge deal.

This is just my personal experience. Over the last couple months I have seen countless of similar reports . Some of them Lazarus like, as some patient living their last breath rose from their beds and started walking over the water! Okay, not that much, they surely were going back to their daily activities badmouthing their family that wouldn't allow them to do as they please. Others just show their exams measuring tumor regression. And I'm talking about terminal patients that lost all hope.

Is this a cure for all kinds of cancer? I doubt. It will help many people? Veeeeeery likely! It will cure enough people to make this a useful approach? Betting my money on it. And finally, it will cure me? Certainly hope so!

So this is part of the information that I gathered and I sincerely hope it can bring hope and health to many hopeless people that had been seeking for some alternative to conventional cancer treatment. After all cancer sucks big time.